Ready for Some “Pep” Talks? Meet The Hottest Rising Peptides in Skincare!

Peptides always keep a place in the anti-aging research and are increasingly used as active ingredients in skincare products. Between 2011 and 2018, the percentage of anti-aging cosmetic products containing peptides was raised from 23.5% to 25.2%, according to a recent study from Portugal.

Peptides always keep a place in the anti-aging research and are increasingly used as active ingredients in skincare products. Between 2011 and 2018, the percentage of anti-aging cosmetic products containing peptides was raised from 23.5% to 25.2%, according to a recent study from Portugal[1]. In the last two decades, many new peptides have been developed, and new knowledge on how peptides improve the skin has been uncovered. The global anti-aging market is expected to grow at an approximate 8% CAGR between 2018 and 2021, reaching a value of USD 271 billion by 2024[2], according to MarketWatch.

Peptides are short chains of amino acids. The amino acids in a peptide are connected to one another in a sequence by bonds called peptide bonds. These short amino acid polymers act as building blocks of proteins such as collagen, elastin and keratin, which are essentially the foundations of our skin that are responsible for its texture, firmness, and elasticity.

Cosmetic peptides can typically be classified into four categories: signal peptides, carrier peptides, neurotransmitter inhibitors and enzyme inhibitors. Some common peptides used in cosmetic products are as shown in Table 1. 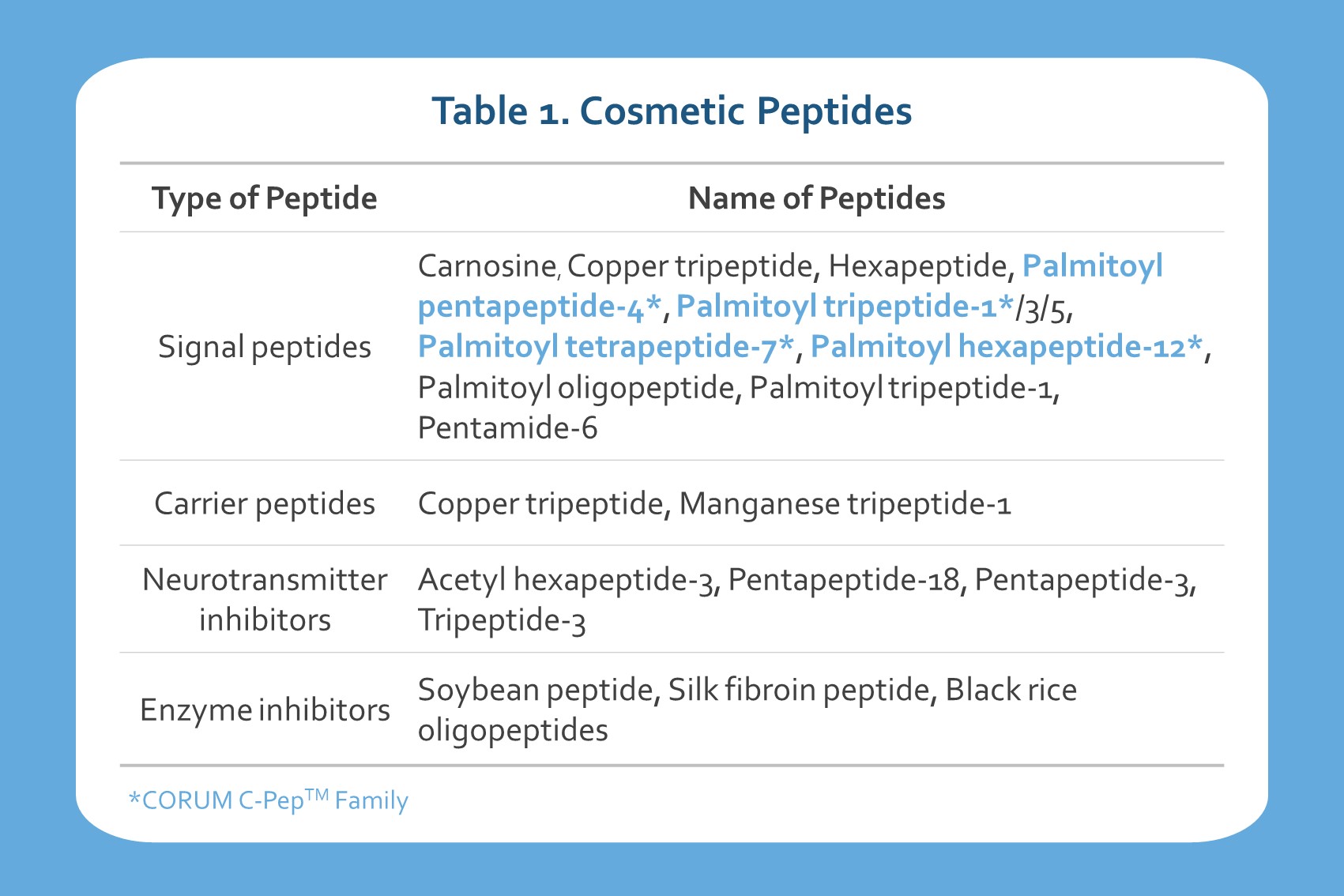 According to the same study from Portugal, signal peptides were the most used since 2011 among these 4 categories, showing a high use prevalence at almost 60%. From 2011 to 2018, the number of signal peptides further soared to over 80%. 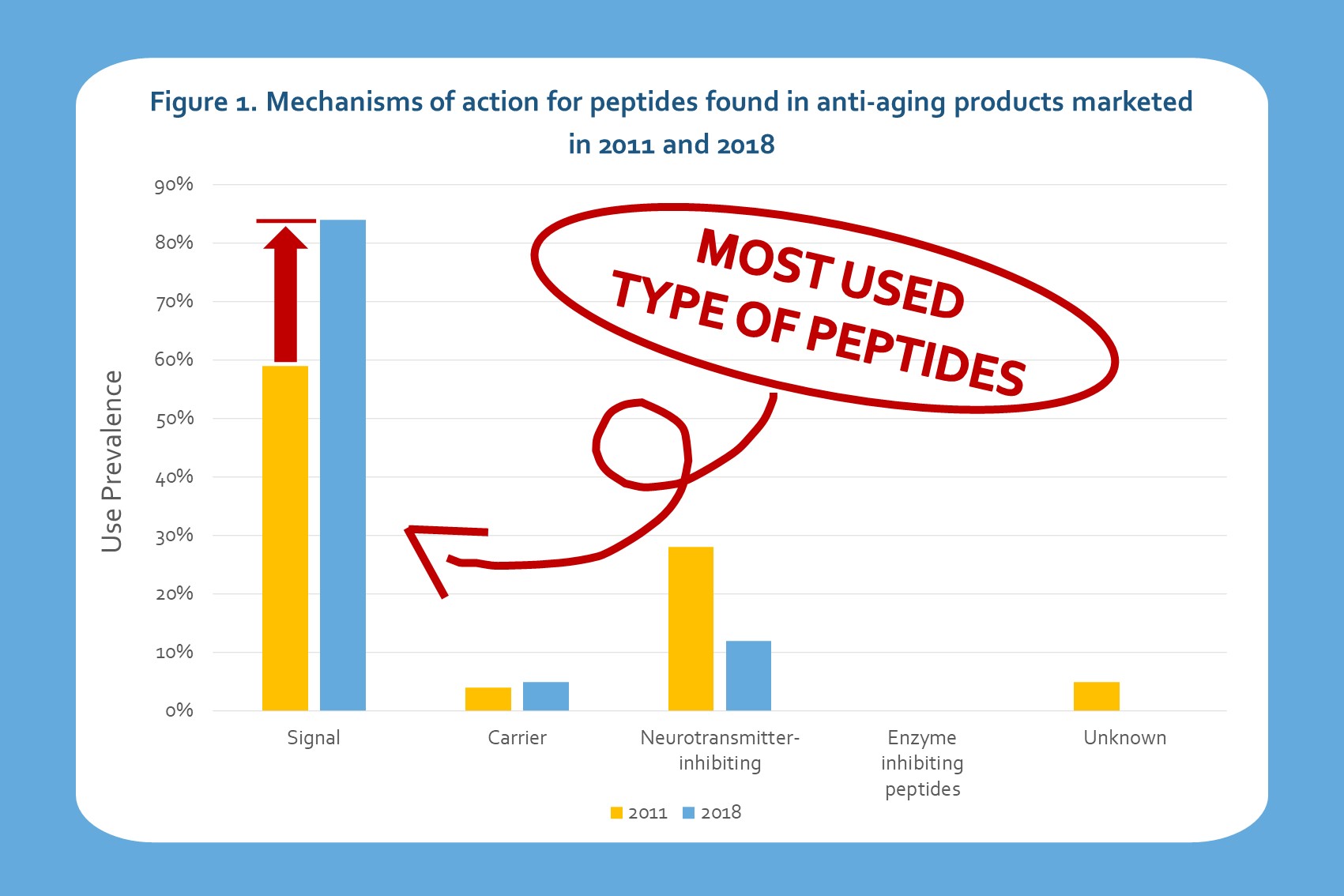 Furthermore, it is worth noting that the most used peptides during the seven-year period for anti-aging cosmetics are mostly signal peptides and there has been a noticeable shift over this period. In 2018, Palmitoyl Tetrapeptide-7, Palmitoyl Tripeptide-1 and Nicotiana benthamiana Hexapeptide-40 SH-Oligopeptide-1 became the hottest rising stars, replacing the pole positions occupied by Palmitoyl Oligopeptide and Acetyl Hexapeptide-8 back in 2011. 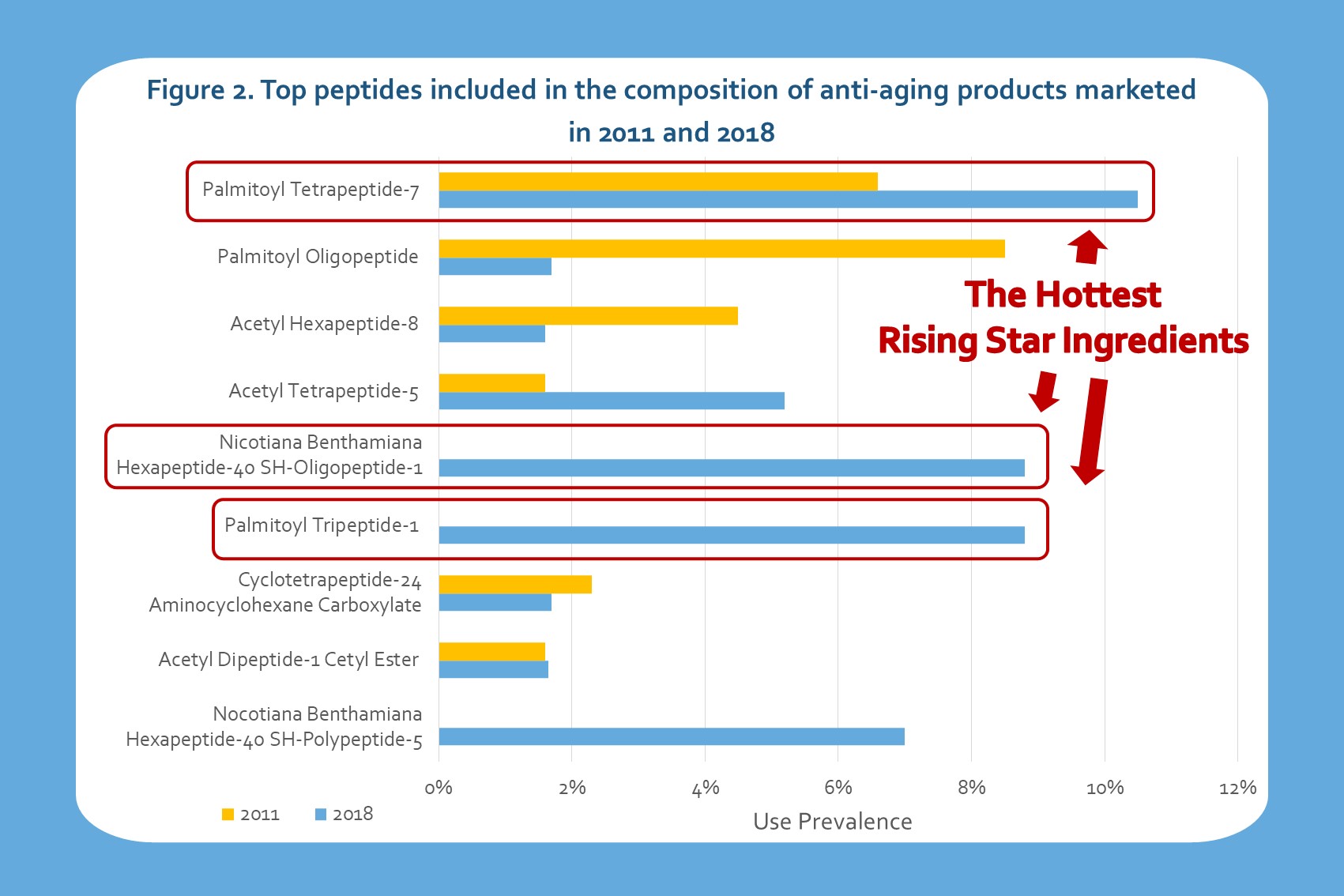 What makes these trending peptides so special? For Palmitoyl Tetrapeptide-7, which is also known as C-PepTM Defensyl, it is a fragment of immunoglobulin G. Palmitoyl tetrapeptide-7 decreases IL-6 secretion and reduces inflammation after UVB exposure[3]. As for Palmitoyl Tripeptide-1, which is also known as C-PepTM Tricoll, it has shown the ability to stimulate collagen synthesis in a human fibroblast culture and prevent collagen degradation after the exposure to UVA light[4]. And the reason why they are more widely accepted by the market than the others is probably related to the fact that these ingredients have more scientific evidence supporting their efficacy[5].

Belongs to the current most popular signal peptides family, CORUM’s C-PepTM is the range of anti-aging peptides which are synthesized from pharmaceutical grade amino acids. They are conjugated with palmitic acid, the most abundant lipid found in the skin, to improve skin penetration of the actives and to protect peptides from degradation by endogenous enzymes. C-PepTM are proven to protect DNA, stimulate collagen and elastin synthesis, promote fibroblast proliferation, strengthen tissue connection and help skin against chronic inflammation which can help in restoring skin youth. C-PepTM can enhance the functions in a variety of skin care and color cosmetic formulations. 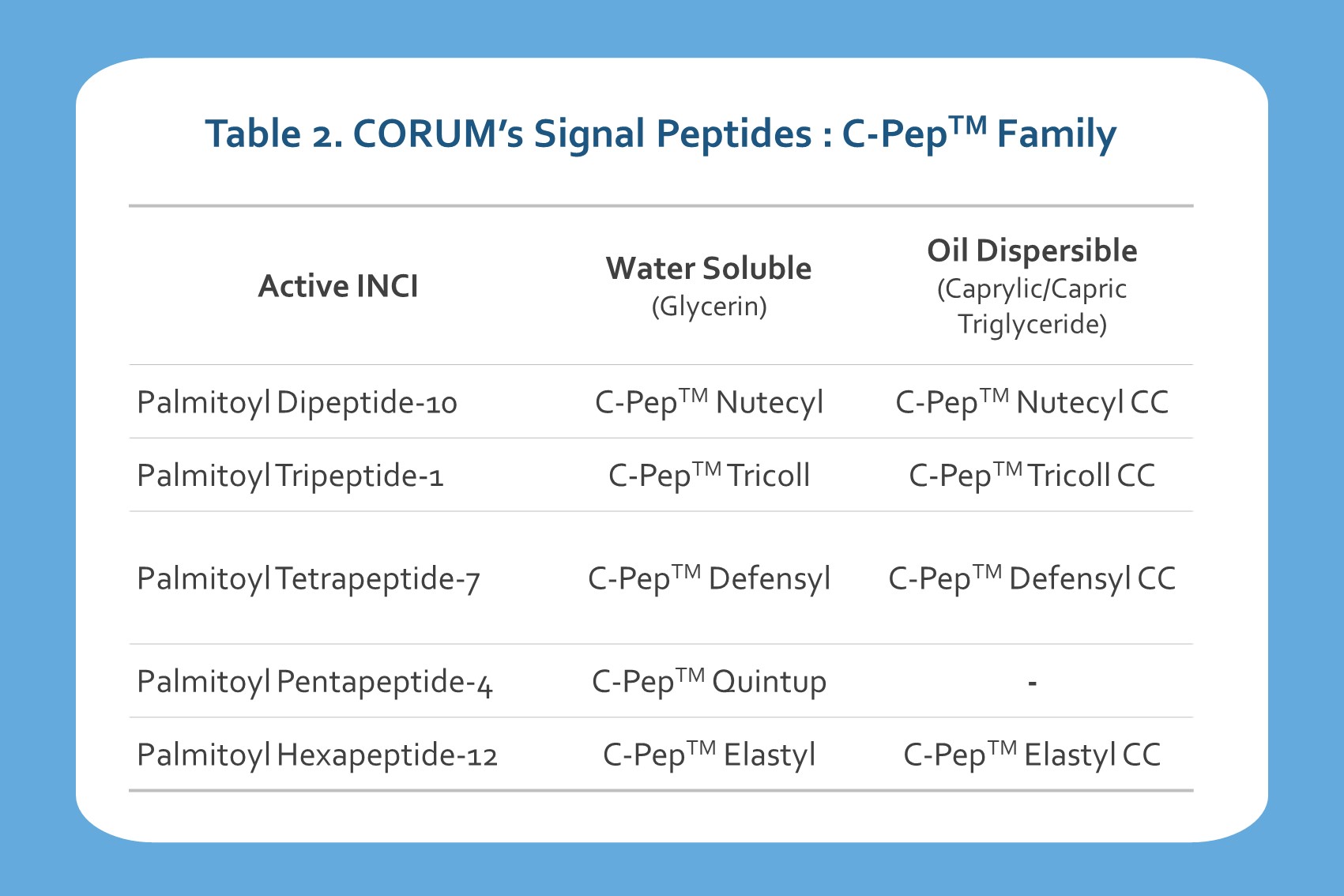 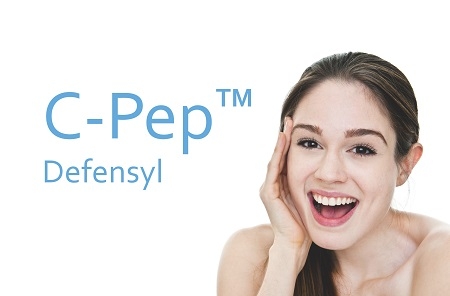 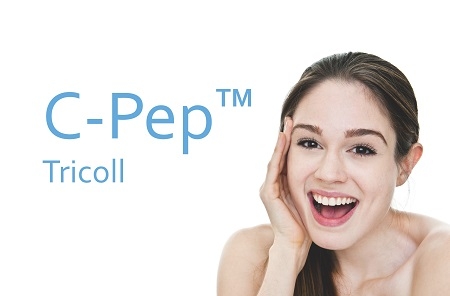 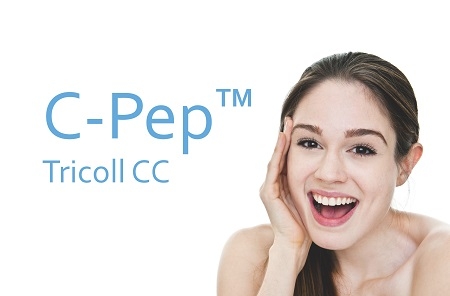